By adminCategories: NewsPublished On: Saturday 7 May 2022 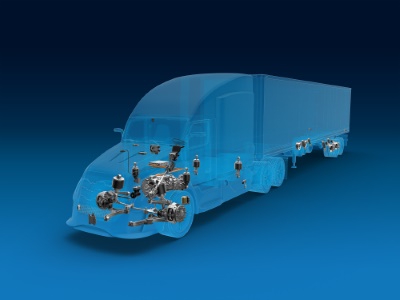 Trucks are making up an increasing proportion of business for German automotive driveline and chassis components giant ZF as it repositions itself as a supplier of components and systems for electric vehicles.

Speaking at the company’s annual press conference, CEO Wolf-Henning Scheider said the “one-dimensional” crisis caused by the Covid lockdown in 2020 had been transformed into a “multidimensional crisis” by semi-conductor shortages, price hikes and production stoppages the following year.

Recovery was expected in 2022, but factors such as the war in Ukraine and inflation still made for a volatile outlook.

However, the company had achieved financial targets and won new business. There was a strong focus on new technologies and a new Commercial Vehicle Solutions Division had been launched in the wake of the takeover of Wabco.

Sales were up 17.5 per cent from €32.6 billion in 2020 to €38.3bn in 2021, said chief financial officer Dr Konstantin Sauer, in spite of a drop in the number of vehicles produced because of the chip shortage.

Looking to the future, Wolf-Henning Scheider said sales of electric vehicles were expected to exceed those of conventional ones by 2028, and ZF could offer electric motors, inverters, transmissions and software systems.

ZF was becoming less dependent upon passenger cars. In 2019, 80 per cent of ZF sales were to the car sector, and 12 per cent to the commercial vehicle market. In 2021, the car share had fallen to 73 per cent, and the commercial sector had risen to 18 per cent, thanks in part to the Wabco takeover.

These included modular and scalable silicon-carbide inverters, modular electric motors and a range of electric power take-off systems under the eWorX banner.