By adminCategories: NewsPublished On: Tuesday 7 June 2022 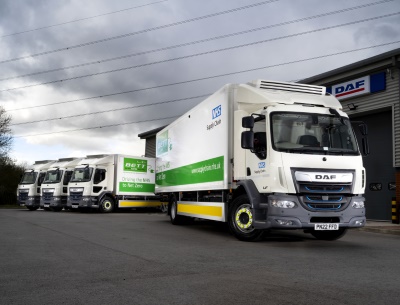 A £200 million funding package announced by the Department for Transport (DfT) last month has been praised as a key step in decarbonising the sector.

The three-year programme could see hundreds more zero-emission HGVs rolled out; and an open-call competition will be launched inviting manufacturers, energy providers and fleet and infrastructure operators to showcase their technologies. The first phase of this will involve demonstrations of battery electric and hydrogen fuel cell HGvs.

The demonstrations will help amass evidence on which zero-emission technologies are best suited to the heaviest road vehicles in the UK, and the charging and refuelling infrastructure that will be required to enable the shift to zero-emission freight by 2050.

Michelle Gardner, acting deputy director for public policy at Logistics UK, said: “Logistics businesses are committed to decarbonising their operations, but to ensure a smooth transition they need clarity on the path to zero tailpipe emission HGVs.

“The trials announced today will play a crucial role in identifying the right technological solutions to help enable this.”

Gardner also welcomed the launch of a consultation last month which aims to identify any exemptions that may be necessary from the 2035 phase-out date for the sale of new non-zero emission HGVs of 26 tonnes and under.

The consultation, which is open until 22 July, is seeking evidence on vehicle applications within this weight class that may need until 2040 to transition to zero-emissions – for example, those that carry heavy or abnormal loads, operate in specialist or remote areas, have additional power draw or are used in long-haul applications.

By 2040, the government has said that all new HGVs sold in the UK, including artics with a gross combination weight of greater than 26 tonnes, will be zero-emission.

Chris Ashley, policy lead for environment, said: “We welcome the further clarity that ministers are giving on the direction-of-travel to decarbonise logistics. This will assist operators as they plan their fleet replacement programmes into the future.

“However, resilience-planning should also be factored in to government plans, so that all parts of society and the economy can be serviced at all times.”

This Battery Electric Truck Trial (BETT) scheme, alongside six feasibility studies, will inform the new demonstration programme that has now been announced.

The 20 DAF LF Electric vehicles on the existing BETT scheme are now entering day-to-day operations and gathering real-time data, the results of which will be provided on an interactive website, developed in collaboration with low carbon consultancy specialist Cenex, to help inform fleet purchasing decisions.

Eight of the DAFs are being deployed by NHS Supply Chain, supported by Prohire Ltd, with a further five to be used by local NHS trusts, and the remaining seven going into service on local authority work. Specifications include Paccar box bodies from DAF, and temperature-controlled bodies from Gray & Adams.

Key to BETT is vehicle charging analysis, with Paccar charging units at 13 operator locations providing a broad range of data and a range of capacities depending on the operation.

Driver training for the LF Electrics is being provided by the DAF Driver Academy, with support and service back-up from DAF dealers.

Announcing the new £200m funding, transport minister Trudy Harrison said: “Our road freight industry is one of the most efficient in the world and contributes over £13 billion to the UK economy each year.

“But we must accelerate our journey towards our net zero goals…

“Our ambitious plans will continue to ensure food is stocked on the shelves and goods are supplied while eliminating fossil fuels from HGVs and making our freight sector green for good.”

On the rollout of the existing BETT scheme, Harrison said: “Demonstrating the high perfor­mance of battery electric tech­nology in demanding, real world environments is critical to ensur­ing confidence continues to build within the industry around the fu­ture of zero emission trucks…

“This demonstration will help us understand the full benefits of this new technology as we power up the electric revolution across the UK and boost green jobs in our towns and villages.”

Rob Lawton, principal engineer for alternative powertrains at Leyland Trucks, said the rollout of the BETT vehicles for real-time operations was a significant step in the project.

“We’re working closely with our project partners in order to collect the most accurate data possible,” he said.

“Electrification is becoming a major consideration for operators, and it’s crucial they’re able to scrutinise reliable evidence before investing in this relatively new technology.

“We’re also very proud to be part of this project and having been given the opportunity to showcase our engineering and technological expertise.”

Meanwhile, the focus on en­suring that charging and refuel­ling infrastructure is sufficient to facilitate the planned shift to ze­ro-emission vehicles has stepped up a gear.

Trade groups have welcomed analysis that suggests up to 78 per cent of electric truck charging and hydrogen refuelling could be met at motorway services, if the £950 million Rapid Charging Fund for vans and cars announced by the Treasury in 2020 were to be extended to all vehicles.

The report, from National Grid and delivered in partnership with industry, suggests zero-emission HGVs will need similar connections to the electricity transmission system, and in similar locations as those needed by vans and cars.

For a ‘small marginal cost increase’, says National Grid, the analysis shows that sufficient grid capacity could be delivered to cover 100 per cent of on-route HGV charging, while cost savings could potentially be achieved by coordinating with the Zero Emission Road Freight Trial.

National Grid recommended that the government expand the scope of the Rapid Charge Fund to include en-route provision for HGVs “in order to accelerate the decarbonisation of the freight sector by maximising economies of scale, driving cost efficiencies, and minimising disruption for MSA operators and the public.”

The report, which was launched at ITT Hub, found that: “Having access to a fast and reliable en-route charging network or hydrogen refuelling, will remove a key barrier to the adoption of zero-emission HGVs.”

Graeme Cooper, head of future markets at National Grid, said: “The switch to fully decarbonised road transport will only happen if we have the right wires in the right place, at the right time.

“Our analysis shows the importance of digging once and in the right location. Planning future charging infrastructure around connections to the transmission system can bring cost savings and reductions in the amount of infrastructure required.”

The report’s conclusions have been backed by the RHA and Logistics UK, as well as major truck manufacturers.

James Venables, eConsultancy manager at Mercedes-Benz Trucks UK, who met with Trudy Harrison at ITT Hub and outlined the manufacturer’s zero-emissions strategy, said of National Grid’s report: “We’re bringing trucks like the battery-electric Mercedes-Benz eActros Long Haul to market, but the provision of suitable HGV charging infrastructure on the UK’s strategic road network is essential to the success of Daimler Truck’s decarbonisation strategy. Collaboration is key for our customers to meet their zero-emission goals.”

Andrew Scott, head of electric mobility at Renault Trucks, said: “The work of National Grid indicates that such a charging infrastructure could be facilitated through a modest extension of Project Rapid.

“We believe this would be a very strategic and worthwhile investment which would significantly increase confidence in and take-up of decarbonised commercial vehicle solutions.”

Tanya Neech, head of sustainability at Scania UK, said: “Scania fully supports the Government’s and National Grid’s ambition to decarbonise heavy duty vehicles, but it’s imperative we get it right. Time is of the essence, and with our science-based targets guiding us, we are ready for the future.

“However, the infrastructure isn’t. We need adequate provisions for these vehicles and long-term subsidies and incentives to create competitive total cost of ownership and operating costs.

“Making the right decisions now and ensuring that Project Rapid considers and includes HDVs is essential, to make it not only possible for us to reach our Net Zero goals but also viable for businesses to make the switch to zero emission vehicles.”