By adminCategories: NewsPublished On: Monday 27 June 2022 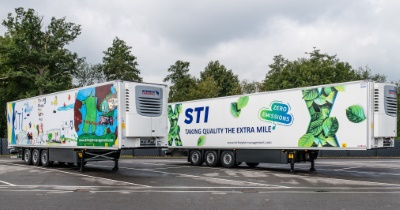 Rising material prices are impacting on profits at European trailer market leader Schmitz Cargobull, while production is now being constrained by the availability of wood, CEO Andreas Schmitz told journalists at the company’s pre-IAA press conference at its tipper factory in Gotha, Germany.

The company plans to manufacture and sell between 55,000 and 65,000 units of all types this year, but numbers will ultimately be limited by the availability of wood. Its researchers were looking for alternatives, including recycled plastic, but had yet to find anything as suitable for trailer flooring, Schmitz said.

The company had enjoyed a spike in production post-Covid, but had lost €50 million in the process.

“Materials prices were increasing faster than we could pass them on,” Schmitz admitted.

Normally the company maintains a ‘raw margin’ (the difference between the cost of material bought in and revenue from finished vehicles leaving its plants) of 31.1 per cent, but this had dropped to just 5.9 per cent.

It was part of a general trend. ‘Producer prices’ in Germany had increased by over 33 per cent in 12 months, while consumer inflation was only running at eight per cent.

“Increases in production prices are not being passed on to consumers, yet, but we have had to drastically increase our prices and will continue to do so,” Schmitz said.

“We want to stay as European market leader, by making reliable and innovative product.”

The company’s dry freight trailers were its highest volume product, but reefers remained the most important. Schmitz Cargobull’s own fridge unit, an exclusive in-house product, was now number two in the European market and closing in on the market leader. It was available with a choice of two diesel engines, or as an all-electric machine, with the option of drive from a generator-axle on the trailer.

Customers who chose the SCB fridge could benefit from ‘over-the-air’ upgrades delivered via the company’s telematics system.

For instance, diesel fridge units could now be operated in two additional modes: one was very precise, where temperatures were maintained within close preset parameters for very sensitive high-value cargoes, and the other was an ‘economy’ mode which minimised engine run times.

“This is the advantage of a digitalised product. Software can be upgraded ‘over the air’ just like an iPhone. It’s unique to Schmitz Cargobull,” he said.