By adminCategories: NewsPublished On: Tuesday 28 June 2022 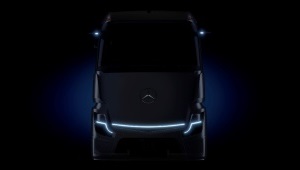 Mercedes-Benz will reveal what it calls the ‘concept prototype’ of its all-electric eActros LongHaul at September’s IAA Show in Hannover, Germany. The launch comes just two years after Mercedes first announced it was working on the project.

Transport Operator understands that the tractor unit at the show will be one of a small number of vehicles currently undergoing track testing in Germany, prior to the commencement of on-highway trials later in the year.

Field test vehicles will be in customer hands next year, and production will commence in 2024.

With a range of around 500 km and a gross weight of 40 tonnes, the eActros LongHaul represents a step up from the current 19 and 27-tonne eActros rigid trucks that have just arrived in the UK (Transport Operator, 107), and have been in production since October last year. An eEconic low-floor municipal vehicle, using the eActros rigid running gear, is due to go into production this month.

Karin Rådström, CEO Mercedes-Benz Trucks, said: “The electrification of heavy long-distance transport is the next milestone on our road to CO2-neutrality. The eActros LongHaul is a battery-electric vehicle which is planned to be economically feasible for our customers. My team and I look forward to presenting this innovative truck to our customers and the public in September.”

The batteries used in the eActros LongHaul employ lithium-iron phosphate cell technology (LFP). These are claimed to enjoy a longer service life and more usable energy than competitor products. The batteries can be charged from 20 to 80 per cent in well under 30 minutes at a charging station with an output of about one megawatt. Mercedes claims that the long range on a single charge in combination with megawatt charging will result in overall ranges on a par with conventional trucks and enables two-shift operations.

Daimler Truck, Traton Group and Volvo Group have signed a binding agreement to establish a joint venture for the public charging of long-distance transport vehicles. This provides for the establishment and operation of a public high-performance charging network for battery-electric heavy-duty long-distance trucks and coaches in Europe. The charging network of these three parties should be available to fleet operators in Europe, regardless of brand. For depot charging, Mercedes-Benz Trucks works with Siemens Smart Infrastructure and Engie to provide operators with private charging facilities.