By adminCategories: NewsPublished On: Friday 1 July 2022 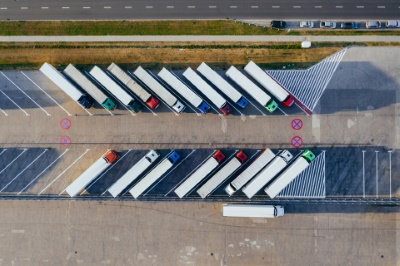 A report on the state of the road freight supply chain by the House of Commons transport select commit­tee, which was released last month, has been met with a mixed response from industry trade groups.

The cross-party group of MPs said that the logistics industry had failed to ensure the delivery of essential goods to retail outlets since the end of the lifting of the most severe Covid restrictions, highlighting re­ported shortages of fuel in filling stations and empty shelves in supermarkets.

Among the report’s key recommendations is that: “The government should give the logistics sector two years to deliver sufficient drivers and high-quality parking facilities.

“If industry does not deliver, the government should implement [a] levy charging mechanism and cause the industry to pay sufficient sums for the gov­ernment to build these facilities and pay to train new drivers, so they do not have to pay the cost of their own training.”

The report said that this supply chain levy: “should be applied to those at the production and sales end of the supply chain, such as large retailers, oil compa­nies and online service giants.

“These organisations currently make large profits which do not trickle further down the supply chain to the companies which transport the goods. As a result, hauliers and ferry operators are posting oper­ating losses and therefore cannot afford to increase the pay and welfare standards of those they employ.

“The supply chain levy would require the parts of the supply chain where margins are greatest to deliv­er improved standards and the resilience to the sup­ply chain which they themselves require to ensure their shelves, warehouses and petrol pumps are full.”

Such a mechanism must, however, be comple­mented by government planning reform in order to ensure its deliverability, the MPs said.

The committee acknowledges the narrow margins endured by transport companies, and their vulner­ability to shocks in the labour market or spikes in costs. It also warns that govern­ment intervention to alleviate the driver shortage may have left the impression that sorting the issue out in the long term was the gov­ernment’s responsibility.

Instead, it urges the logistics sector to follow the lead of bus and coach operators and train its own drivers at its own cost. Meas­ures to ensure this happens could be included in forthcoming reform to the Driver CPC, it suggests.

The stresses of truck driving are acknowledged. The report argues that until conditions improve driv­er retention rates will remain low, and says the government should intervene by consulting with in­dustry to introduce a binding code of conduct setting minimum standards for drivers’ treatment.

A lack of high-quality rest areas, particularly on key truck routes, is highlighted. The report recalls that a shortage of truck parking spaces was highlighted by a gov­ernment survey five years ago, and points out that drivers are now forced to park in unsuitable areas where they are vulnerable to crime and less able to enjoy proper rest and recuperation.

Reform of the planning network is required, the report says, to take decisions on parking provi­sion out of the hands of local au­thorities who “cannot be expected to elect to provide for lorry parks in their local plans in the face of op­position from residents impacted by such large projects.”

Instead a government-industry taskforce should be established to ensure regional targets set for truck parking provision are met. Minimum standards for truck-stops also need to be established covering security, toilet and show­er facilities, food options and facil­ities for female drivers.

The committee acknowledges that the fragmented nature of the haulage sector is not conducive to concerted action by logistics oper­ators to improve driver conditions.

Here, it castigates the ac­tions of “a few large companies, such as the major supermarket chains.”

“These companies use their market power to drive down costs but take no responsibility for the consequences,” the report says.

“What is needed is a sec­tor-wide solution, but, so far, despite a lot of warm words, the sector has failed to deliver this. Radical action is required to end this cycle of failure.”

The “radical action” is the im­position of a two-year deadline on the large, profitable players at either end of the supply chain to deliver the improved conditions required. Failure to do this on a voluntary basis would see the compulsory levy imposed.

A continued lack of diversity in recruitment, particularly of wom­en and young people, concerned the committee: “That one per cent of drivers are women, and only three per cent of drivers are under the age of 25, should be a cause for shame for the industry and a clarion call to do more. The supply chain levy we recommend, and resultant improvements in train­ing and facilities, should assist in improving these appalling ratios.”

But it welcomed the introduc­tion of ‘HGV skills bootcamps’ as a faster and more flexible alterna­tive to conventional apprentice­ships, and said the government should make them permanent, with some targeted specifically at under-represented groups. Fund­ing could come from the current apprenticeship levy, it suggested.

The government should also work towards more intermodal transport, which would improve the lot of HGV drivers as they would spend fewer nights away from home, the report said.

“The current model which sees freight moved from one end of the country to the other by road is illogical,” it found. “Moving to a multi-modal model, in which long distances are served by rail and water and shorter journeys by road, will help the country decar­bonise and improve the efficiency and resilience of the freight and logistics sector.”

The MPs also urged govern­ment to work with the European Commission and governments in France and Ireland to reduce Brexit-related border delays.

Responding, the Road Haulage Association (RHA) said it broad­ly welcomed the report and the committee’s focus on the signifi­cant issues affecting the industry, adding that the recommenda­tions in the report were in line with many requests it had made.

“Whilst we support many of the government’s 33 measures to deal with the HGV driver shortage, as the report highlights, many of these are limited, temporary measures and the systemic is­sues affecting the industry require long-term planning,” the RHA said.

“The report rightly identifies that the voice of the SME needs to be heard more clearly in gov­ernment to find the right solutions to our long-term problems; most hauliers are SME. With firms fac­ing huge financial pressures it’s unreasonable for the logistics sec­tor to fund driver training alone, given the significant upfront cost, the acute shortage of drivers and the difficulties in retaining new drivers due to external factors.”

The association praised the re­port’s recommendation to make HGV skills bootcamps a perma­nent feature and to make greater use of apprenticeship levy funds.

“We appreciate the principles behind the supply chain levy, but we need assurance that this would not result in undue cost pressures or limit the growth of SME hauliers,” it continued.

“We’re concerned that the industry cannot make the neces­sary changes to avoid the levy in just two years when so many of those changes are outside of the industry’s control.

“We oppose any measure which risks significant additional cost on SMEs.”

Richard Smith, managing di­rector of the RHA, added: “We welcome the recognition of the difficulties of life as an HGV driv­er. In many places HGVs and their drivers are simply not welcome.

“This needs to change. We wel­come measures that will improve HGV drivers’ experiences on the nation’s roads and the way they’re treated.”

Logistics UK said the MPs’ re­port unfairly attempted to blame the industry for problems encoun­tered across the supply chain for food and other shortages, while ignoring public policy failures.

“To place all the blame for the supply chain issues facing our industry at our door does our workers a great disservice, and totally ignores the role which the government and other agencies have played in creating staff re­cruitment and retention problems across the sector,” said Logistics UK chief executive David Wells.

He observed that, despite op­erating on very narrow margins often of less than one per cent, the sector had already made sig­nificant investment in the next generation of workers through the apprenticeship levy, having paid in £700 million.

“However, due to a lack of ap­propriate qualifications for the sector, which did not even exist until 2021, only £150 million has been able to be drawn down thus far, representing a tax on our sec­tor and a huge, missed opportuni­ty for recruitment,” said Mr Wells.

He added that it was a “nation­al disgrace” that HGV drivers were still unable to access safe and se­cure truck stop facilities, despite having “worked so tirelessly” to protect supply chains during the Covid pandemic – with many forced to take legally required breaks at roadsides.

“It is not the industry’s respon­sibility to build and run these facil­ities, not least because they are commercial enterprises, many of which cater for all road users and not just the haulage sector,” he continued. “The real problem that has not been resolved is lo­cal authority planning rules and red tape that prevent these facil­ities being built in the first place. To suggest that these new builds, which are used by all road users, could be constructed as a result of a levy on hauliers would place an unfair, disproportionate bur­den on the industry.”

Mr Wells added that the re­port’s overview of the sector’s issues with recruitment was “con­fused and misleading”.

“Like nearly every other indus­try in the UK, logistics is facing issues caused by a combination of factors, none of which are with­in its control,” he said. “These include an ageing workforce, the loss of European workers after Brexit and the impact of the Cov­id-19 pandemic on testing of new HGV drivers.

“The industry has already come together to create and fund a massive skills and recruit­ment campaign, aimed at young people, women and other un­der-represented groups, to attract new talent into the sector. The government is aware of this and has committed to supporting the industry’s efforts.”

He concluded: “It’s disap­pointing that the committee has taken so long to reach the wrong conclusions and not address the real public policy issues needing urgent attention.”