By adminCategories: NewsPublished On: Thursday 31 March 2022 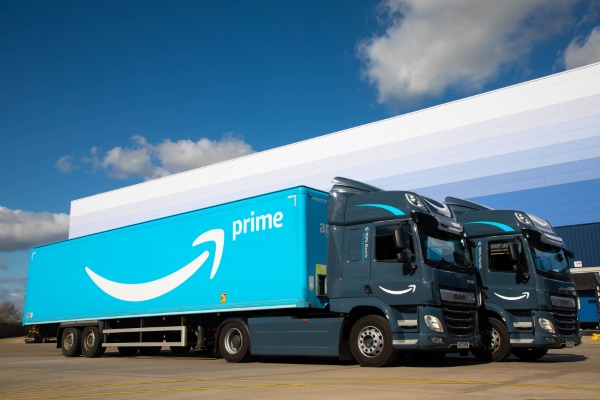 Online retail giant Amazon has added its first ever fully electric HGVs to its UK fleet, which are now operating from its Tilbury and Milton Keynes fulfilment centres.

The five DAF CF Electric 37-tonne, zero-tailpipe-emission trucks replace diesel HGVs, in a move that will fuel up to 100,000 road miles with renewable electricity annually instead of diesel, thereby avoiding the emission of 170 tonnes CO2e.

The vehicles are the first of nine electric trucks expected by the end of the year, which complement Amazon’s existing fleet of more than 1,000 electric delivery vans currently operating on UK roads. The trucks will soon be recharged via first-of-their-kind fast 360 kW electric charging points at the Tilbury and Milton Keynes sites.

“Amazon is one of the first companies in the world to put electric heavy goods trucks on the road,” said John Boumphrey, Amazon UK country manager. “We’re committed to becoming net-zero carbon by 2040, and this is a milestone as we continue to decarbonise our transportation network so we can deliver more customer orders using zero emissions vehicles.”

Amazon’s first electric HGVs represent a key milestone towards the electrification of its fleet, which forms part of its Shipment Zero goal to deliver 50 per cent of shipments with net-zero carbon by 2030.

The company highlights its focus on reducing carbon emissions in middle mile transportation, including through pilot schemes involving collaboration with local partners on a range of alternative delivery methods.

In 2021, the firm delivered more than 45 million packages in the UK via more sustainable methods such as electric vans or cargo bikes, and says customers can expect to see more zero-emissions vehicles on the roads as its fleet expansion continues.

Investment minister Lord Grimstone commented: “This is further proof that the UK’s logistics sector continues to be at the forefront of efforts to electrify fleets and transition to zero emissions vehicles. Amazon’s introduction of its first-ever fully electric heavy goods vehicles in their UK fleet is fantastic news not only for their customers but for our wider efforts to end our contribution to climate change and transition to cleaner modes of transport.”

Transport minister Trudy Harrison MP added: “It is fantastic to see Amazon and the fleet industry playing its part in the UK’s world-leading plans to clean up our air, boost green jobs and decarbonise our vital transport network.

“Amazon plays a key role in transporting goods to towns and villages up and down the country and I’m pleased to see they are leading the way by going green. With the zero emission market now taking off for even the heaviest HGVs, we’ll be able to move more products around in a way that’s friendlier to our environment while supporting our net zero mission.”

The company cites a recent report it commissioned from Oliver Wyman, which suggested that shopping online results in 50 per cent less greenhouse gas emissions than physical retail, and over four times less traffic – with customers’ deliveries only representing 0.5 percent of total traffic in urban areas.

Amazon also highlights the impact on the sector of its Career Choice training programme, which has allowed 1,400 of its employees to study transportation, including more than 1,000 training to become HGV drivers.