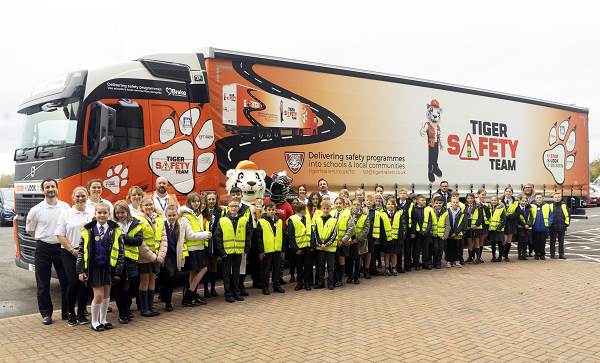 The safety week is run by the charity Brake, with which the Cheshire trailer manufacturer has entered into a three-year donor relationship.

Tiger Safety Team’s school road safety programme’s launch was attended by local dignitaries, children and staff from a nearby school, plus representatives from Volvo Trucks dealer Thomas Hardie Commercials who provide the cabs, and Romac Logistics, which is anticipated to run the one-off trailer on Morrisons’ fleet.

The ‘Stop Look Be Seen’ programme will be delivering road safety messages to Key Stage 2 children in participating schools throughout the firm’s home county of Cheshire, with an emphasis on raising awareness surrounding safe behaviour around larger vehicles, which is especially important in the age group of 10-12 who will often be making unaccompanied journeys for the first time when they begin attending secondary school.

Six children are seriously hurt or killed every day on British roads, points out Tiger Trailers, with under-12s the most vulnerable; and HGVs pose a danger at up to five metres tall and 18 metres long. Awareness of other large and inherently dangerous vehicles, from bin lorries and buses to tractors, will also be promoted.

The team’s visits are completely free, will include both classroom and outside segments, and cover recognising hazards, behaviour change techniques, National Curriculum outcomes, PHSE health, wellbeing and relationships, and the Green Cross Code.

Around forty children plus staff from St. Joseph’s Catholic Primary School in Winsford were given a safety demonstration presented by Tiger’s own driver, teaching them about HGV blind spots, noise, turning circles and other dangers, and a number of children had the opportunity to sit in the cab.

The Tiger Safety Team-wrapped truck supplied by Thomas Hardie Commercials is the same specification as the plain unit used for the safety demonstration in Tiger Trailers’ showroom – a Volvo FH 500 6×2 push axle tractor with a Globetrotter cab and the latest I-See topography software.

It will visit schools with Tiger Safety Team’s branded curtainsider trailer that features its mascot, Tiger Ted, on the eye-catching livery designed to dovetail with Romac Logistics’ colours. The trailer’s curtains were provided by WJ Leech & Sons.

“Child safety and giving back to the community have both been close to my heart over the years and I am delighted that Tiger Trailers is able to play a part in keeping young people safe at a milestone time in their lives, thanks to the support we have received from Volvo Trucks UK, Brake, Thomas Hardie and other organisations, plus the enthusiastic members of #TeamTiger’s factory and office teams,” said Tiger Safety Team’s founder, Alison Cartwright.

Alison manages the company’s wider CSR activities, and has been surrounded by trucks and semi-trailers for much of her life, being the daughter of the late and much-respected Alan Cartwright and sister to Tiger’s joint MDs Steven and John.

She added: “We are excited about 2022 in which we will be visiting schools regularly to deliver our ‘Stop Look Be Seen’ programme, and it will also be wonderful to see the Tiger Safety Team introduce other initiatives as time goes on, from factory safety education to projects focussed on cyclists, HGV drivers and others.”

The Tiger Safety Team will also use opportunities to promote the logistics industry and manufacturing careers to women, having received support from HGV driver Heidi Chapman, part of Veterans into Logistics’ team, and also Emma Elston MBE, CEO of UK Container Maintenance and a previous winner of Business Woman of the Year.

Tiger Trailers employs circa 230 staff at its Cheshire site where it manufactures a full range of products, from advanced moving deck double deck, temperature-controlled and box van trailers to swap-body demountables, rigid bodywork and specialist engineering projects for its diverse client base. The Alan Cartwright Foundation recognises the company’s top-performing apprentices.